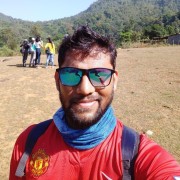 The nervousness of a new beginning, a pitch dark trail surrounded by bushes reaching the waist height, slippery slopes and a wholesome bunch of people. “You’ll never know if you never go”. The night trek to Uttari Betta also known as Hutridurga from Bengaluru was one such moment for me. True to that quote, I never knew night treks could be so much fun and scary at the same time.

If not for this trek, I would’ve never known about it. Similarly, I wouldn’t have known that I enjoy trek leading as much as trekking and I liked staying up all night if I was doing something exciting. Such was that night. The night of so many firsts and expectedly so much fun. And it all started with me saying yes to something new, yet another time, for leading a group to the peak of Uttari Betta from Bengaluru at NIGHT.

This journey was nothing short of an exciting one where I learned to overcome my own fears and lead others to a destination. A true journey from darkness to the light, ironically on a night trek ;).

Come Aboard! We’re Off to Uttari Betta

Like all the other treks with Plantheunplanned, we boarded the bus at HSR. Briefly stopped at Domlur to pick up a few more people and a final stop at Mekhri Circle to pick the rest of them. That afternoon, I was reading up something about interpersonal interactions. I learned that we often use our jobs as a shield to say what we really want or do. And if my previous treks are proof, more often people eventually open up that what they are doing isn’t what they intend to do.

So I thought, why not ask people to introduce themselves without mentioning their jobs. So I did, and boy, that really got people thinking on their toes and then they opened up with amazing introductions. It was truly inspiring to see what all people around us do to keep themselves busy. Adding to that, almost the entire group were first-time trekkers. Well, it was my first too, but as a trek lead. Would be fun to see how this goes, I said to myself.

While the introductions kept us busy, the driver didn’t give a damn about them. He continued his assault on the accelerator pedal. As a result, the distance between Uttari Betta and Bengaluru trembled with fear and reduced to a furlong. We drove through the dim-lit roads beyond Magadi and reached the basecamp at 1:40 AM. I got up from my seat and looked at the gang.

Should We Stay or Should We Go

Surprisingly, everyone was still wide awake. On a normal day(night), I would be in a deep sleep by that time, but not today. Today of all the days, I had to be wide awake. So, though the initial plan was to sleep at the base camp and start the trek at around 4 AM. But everyone was so excited that they couldn’t sleep. Also, waking up someone that early in the morning can be quite a challenge (even more for a newbie trek lead like yours truly).

So, I asked around if they wanted to start the trek right away. Everyone agreed in unison. So we quickly got down the bus and gathered in a circle for some “ahem-ahem” instructions. I said it’s going to be dark (as if people didn’t see) and dangerous(duh!). Then I uttered, perhaps the only sensible words, let’s not race to the top, but go together as a team(this is one line that I continued to use in all the treks I lead thereafter).

And that pep talk ended and we started walking. The trail starts through a village and there was a left turn at the place where the streetlight ended. We have to walk on a path where even street light doesn’t feel like going, I murmered. But lucklily most of us had torches. So we started walking on that road without giving a damn about what occupied the space beyond the area lit by the torch.

The Royal Entrance of Uttari Betta

A few minutes of a walk later, there was another junction. A T-junction in the middle of nowhere surrounded by pitch darkness. We took a right turn and spotted a huge boulder. Someone ahead flashed the light over the boulder and it fell on an entrance. All those horror movies where the hero flashes the torch on a door and something crawls out of it, flashed in front of my eyes.

Once inside the entrance, another steep rock welcomed us. But it bounced off the moonlight very well, so we didn’t have any trouble scaling it. Cold breeze swept off our faces on the rock. I turned to see if everyone was climbing fine. But something else distracted me altogether.

The scattered Pearls Of Uttari Betta

On a pitch black canvas in the distance, there were glimmering golden dots. Scattered, almost as if a pearl necklace fell down somewhere there. We sat here for sometime to let the view sink in and continued the hike. and reached the fort wall. Well, I wouldn’t say that kings had to jump walls to reach their own fortress but we had to.

The actual trail was through another dark stretch and seemed a bit longer than the one we just crossed. So, we didn’t dare to walk on the ground instead signed up to climb a fort wall in the middle of the night. Talk about an adventure.

So, I stepped on the first stable rock and extended my hand to find another. Placed my other leg on another stable rock and slowly worked my way to the top. Once on the top of the wall, there was another steep slope surrounded by trees and bushes. Unlike the previous trail, this one wasn’t directly exposed. So it was dark and also cold. And you know who likes dark and cold places? I’ll leave that up to your imagination.

I never found my senses function so active. I could hear the weakest of the chirps and the tiniest rustle of the leaves which was a blessing in disguise as I was more alive on the trek. We walked through that scary stretch and reached a stone carved stairway. The rock was too steep, so the stairway was carved out in a semi-circular fashion and we followed it.

Have You Ever Seen The Caves? At Night?

We continued walking through the bushy trail for a while, hopping over small rocks and climbing down the larger ones. After a while, the trail tapered into a cave. It was too small for most of us to walk upright.

So we bent down, holding the torch in weird positions and walked through that pitch darkness through stairs sandwiched between two huge boulders.

But we were more than ready for the challenge.

After a 20 min walk through a muddy path filled with weeds and trees, we reached the peak. And I was shocked to see most of the plain ground was already occupied. I didn’t know Uttari Betta attracted so much crowd.

Luckily, we found a nice spot for ourselves and settled down. Few games followed but my mind kept going back to the photography experiments I did earlier that week. I played with the exposure settings and tried to capture light trails and occasionally even write my name.

I thought, why not continue those experiments here. The light was perfect in the sense that it wasn’t there at all. So, it would be a perfect setting for a long exposure shot. I quickly pulled out my phone and showed the results of my experiment. I asked the gang if anyone wanted to volunteer. Many hands went up and I had a great time clicking these pictures.

Until the dawn arrived.

I think we all left whatever we were doing and sat down, eagerly waiting for the golden hour. The clock ticked past, 5:30 AM, the sun was nowhere to be seen. It went past 6 AM and still nothing. There was nothing but dense fog all around the Uttari Betta peak.

I was disappointed to miss the golden hour. So we thought we’ll spend more time at the Uttari Betta peak and explore it. We explored each and every corner of it and clicked pictures at every picture-worthy place. Boulders, slopes, trees, caves, we didn’t leave anything.

The fog cover slowly started to fade away and it took the disappointment with it. The clearing of the fog revealed the breathtaking landscapes.

Even the trail was clearly visible on the way back. I chuckled, looking at all that we walked through.

Imagine crossing this amidst pitch darkness and not slipping.

I didn’t realize there was a temple on the fort. On our way back, I saw a small trail diverging towards another huge rock. We had all the time at hand, so we climbed up.

We reached the temple and I was blown away. I walked to the corner of the rock and boy the landscapes around the Uttari Betta were breathtaking.

The landscape is so pretty that you can’t stop yourself clicking over 100 pictures or just sit and let it all sink in. The wind was very heavy, the kind that can take you away with it. With the wind, the fog was running at the speed of a cheetah and standing at the edge beside the temple, one can feel what a force it was.

After exploring the temple premises, we climbed all the way down. Boarded the TT had some delicious breakfast on the way back and reached Bengaluru. Must say, It was a fantastic trip. I figured that I had the capability to manage people and deal with all kinds of them.

You will find solutions in the most unexpected areas, all you have to do is, figure out a means to get there. And for now, I found trek leading as a means to get to the goal of a better person and a better communicator.

That’s all for today.

Thanks for sparing your time reading it. Hope it was worth your time.

If you liked this post, then do consider signing up for my newsletter below. I send out a weekly newsletter which contains the latest blog post from Trails Of Inju along with a curated article on travel and personal growth.

Processing…
Success! You're on the list.
Whoops! There was an error and we couldn't process your subscription. Please reload the page and try again.